Pump Up the Endorphins!

Endorphins. No, I’m not talking about an alien in some Marvel movie. Endorphins are chemicals released in your body in response to exercise. When you exercise, your body releases endorphins which interact with the receptors in your brain that reduce your perception of pain.

But, more importantly, endorphins trigger a positive feeling in the body.

For example, the feeling known as a "runner's high" is often described as “euphoric." This is because endorphins act as analgesics, which means they diminish the perception of pain and also can as sedatives.

Now before you get all concerned about getting addicted to a runner’s high, understand that endorphins are completely natural to the human body. They are manufactured in your brain, spinal cord, and many other parts of your body and are released in response to those brain chemicals we’ve talked about in past posts called neurotransmitters. The neuron receptors endorphins bind to are the same ones that bind some pain medicines. So don’t worry. Unlike with morphine, the activation of these receptors by the body's endorphins does not lead to addiction or dependence.

— Reduce stress
— Ward off anxiety and feelings of depression Boost self-esteem
— Improve sleep
— Strengthen your heart.
— Increase energy levels.
— Lower blood pressure.
— Improve muscle tone and strength. It strengthens and builds bones.
— Help reduce body fat.
— And, of course helping greatly with depression.
Today, as far as you are able try and develop some kind of program to allow you to exercise on a regular basis. As always, check with your doctor and know your limitations. 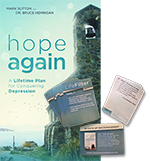